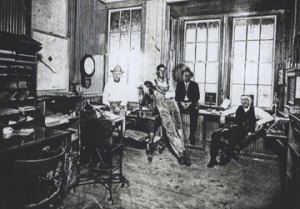 Princeton is at the intersections of U.S. Highway 380 and Farm roads 75, 1377, and 982, seven miles east of McKinney in east-central Collin County. In the late 1870’s T.B. Wilson and his brother, George began farming near the site of future Princeton.

Princeton History MayorIn 1881 the Missouri, Kansas, and Texas Railroad Company extended its line from Greenville to McKinney, passing through the land owned by the brothers. The name Wilson’s Switch was commonly used to designate the area. When residents applied for a post office branch, however, they learned that the name Wilson was already being used. The community then submitted the name Princeton in honor of Prince Dowlin, a landowner, and promoter of the town. This name was accepted, and a post office was established in 1888.

Princeton was incorporated in May of 1912. John K. Wilson was the first mayor following the incorporation. Located in the rich agricultural region of the Blackland Prairie, Princeton quickly became a retail and commercial center for area farmers. In addition to providing mills and grain elevators for wheat, corn, onions, and sorghums, the town also housed a lumber factory that became the state’s largest producer of bois d’arc lumber. By the mid-1920s the town provided electricity, water, natural gas, and paved roads for 500 residents. It also had more than twenty-five businesses, including a bank and a weekly newspaper.

In 1940, the migratory camp was built west of Princeton where the Community Park is now located. It was built for the people who moved into the area to work during the onion and cotton seasons. It was estimated that there were 300-400 migrants at the camp during this period. An overhead storage tank with the capacity of 30,000 gallons of water was the first unit erected on the campsite. Also, 76 cabins were built out of California redwood with shingle roofs and concrete floors. Each cabin was equipped with two beds, oil cook stove with oven, oil heater, and four chairs. In February of 1945, the camp was turned into a prisoner of war camp for Germans captured during World War II. Princeton was one of 120 Texas towns to house a camp for prisoners of war. The city employed the prisoners to make improvements, including enlarging the public park. This operation was continued for eight months. When it was no longer used for prisoners of war, it once again became a migratory camp.

On Monday, May 3, 1948, a tornado struck Princeton which caused an estimated $110,000 worth of damage in town alone. A loss of $150,000 which included crops was estimated by Russell Wilson, cashier of Princeton State Bank. Every business house in town suffered damage to some extent. The Methodist Church suffered major damage, and was torn down and rebuilt. Only one death occurred during the storm, a resident was plowing a short distance northeast of town.

Following the war, the town’s population remained 564 until the completion in 1953 of Lake Lavon, five miles away. The proximity of the lake helped raise the population to 1,100 by 1972. The growth of the Dallas metropolitan area and the emergence of nearby Plano as the business center for Collin County caused the population of Princeton to increase to 3,408 by 1982. By 1988 more than thirty businesses were located in the town, which was surrounded by horse and cattle ranches and productive farms. Princeton is known as an onion-growing center. In 1990 the population was 2,321. The population was 3,477 in 2000. In the 2010 Census, the population had reached 6,924.